IT WAS TWENTY YEARS AGO TODAY...

July, 1996.  The Summer Olympics are being held in Atlanta, and my “private events” band is flown down by Swatch to play their massive event at the Hard Rock Cafe.  We are given all-access VIP credentials for the “Olympic Village," and a full extra day off in Atlanta, including Olympic event tickets.

We meet up in the lobby of the Cumberland Suites Hotel the morning after the gig, to receive our Olympic tickets.  Suddenly, Michael Angelo (singer) comes running out of the elevator toward us.  “Yo,” he says, “I just heard on the radio: JAMES BROWN IS AT THE HOUSE OF BLUES TONIGHT!”

Men’s Swimming, or the Godfather Of Soul?  No contest!  Five of us - myself, Michael, Joe Hrbek (tenor sax), Tommy Russo (trumpet) and Wade Taylor (singer) - form a coalition for The Funk.  We call the House Of Blues, and learn that JB tickets are $50.  (This is 1996, no internet yet.)  We run to the Swatch/Olympics rep and ask her if we can sell our event tickets; she says yes, but only for face value: $150 each.  Done!

We run out of the hotel like the cartoon version of the Jackson Five and catch a tram to the Olympic Village, somehow finding our way to the House Of Blues box office.  (How we did it in 1996 without smartphones, GPS, etc. is beyond me.)  We buy our JB tickets, and then stagger through the hot, humid streets of Atlanta for the next four hours trying to sell our Olympic tickets.  We finally reach the Aquatic Center at Georgia Tech; we are accosted by people waving cash and desperate for our swimming tickets, and they sell quickly and easily.

We stop at a hot dog stand for some lunch and ice cold Coca Cola, hot and exhausted but thrilled at how the day is unfolding: James Brown tonight, AND an extra $100 in our pockets.  God is good, we tell each other.  (The photo below marks that moment.)  We go back to the hotel, shower, rest up, then catch another tram back to Olympic Village for The Show.

We are buzzing with excitement, but now it’s after dark in the Village and the vibe is different.  This was 10 days after TWA Flight 800 mysteriously exploded over the Atlantic Ocean, giving rise to multiple theories about terrorism; you could feel the extra police and security presence, and a slight tension in the air at the jam-packed Centennial Park.  I see the tension rise: a plainclothes cop tries to get into to the show by simply flashing his (concealed) badge, but the doorman won’t let him in without a wristband.  Much chest-puffing and finger-jabbing ensues, but the plainclothes cop ultimately is sent away by the manager.

We get into the venue, a huge tent erected next to the House Of Blues, and take our places near the front of the stage.  A local opening act plays a few songs, and then the stage fills with a dozen or so musicians who start up some monstrous jamming for about 20 minutes before little Danny Ray ambles over to a mic and says “Alright, are you ready for some SUPER DYNAMITE SOUL?”  For the next 2 hours, James Brown hands us our asses and we are completely lost in the glory of The Funk.

The show ends, and Wade and I find ourselves separated from the group.  We decide not to wait up, and start making our way back to the hotel.  We exit the venue, and it’s chaos in the streets: sirens blaring, people running in every direction, helicopters with searchlights.  We try to turn a corner, and we’re stopped by a policeman who shouts “You can’t go down this street; it’s been closed off because of the bomb.”

The bomb?!?  What bomb?  We duck into a bar to try and call a taxi to the hotel (again, it's 1996: no Uber).  The TV above the bar is tuned to CNN, and we find out what’s up: a bomb went off in Centennial Park about 30 minutes earlier, but we missed it because James Brown was handing us our asses.  As the reporters are talking, they’re showing a live shot of the building next door to us!

We tear out of the bar and run down the block, not knowing where we're going.  By the grace of God a taxi pulls up in front of us, and we get in shouting at the driver: “CUMBERLAND SUITES HOTEL!!”  Dude floors it, and we sit in the back listening to the news on the radio about the explosion.  We get to the hotel and the other band members are watching the news on the TV in the lobby.  They run to us: “Are you guys okay?”  We exclaim that we’re more than okay, that James Brown saved us, protected us with The Funk.

Nobody sleeps that night; our flight home is at 6am.  By 9:30 I’m back in my Manhattan apartment, dead asleep on my futon.  I wake up that afternoon, go to the bodega on the corner and have my mind blown as I stand on a corner in New York City reading a newspaper story about the bombing at the Atlanta Olympics that I was just at the night before.

What has changed in 20 years?  Footage of the actual explosion occurring is nearly impossible to find; today we’d see it from a hundred different angles on Facebook Live.  We have unfortunately grown accustomed to violence at public gatherings, and the increased security and surveillance that accompanies it.  But one thing has remained the same: The Funk will always save your ass. 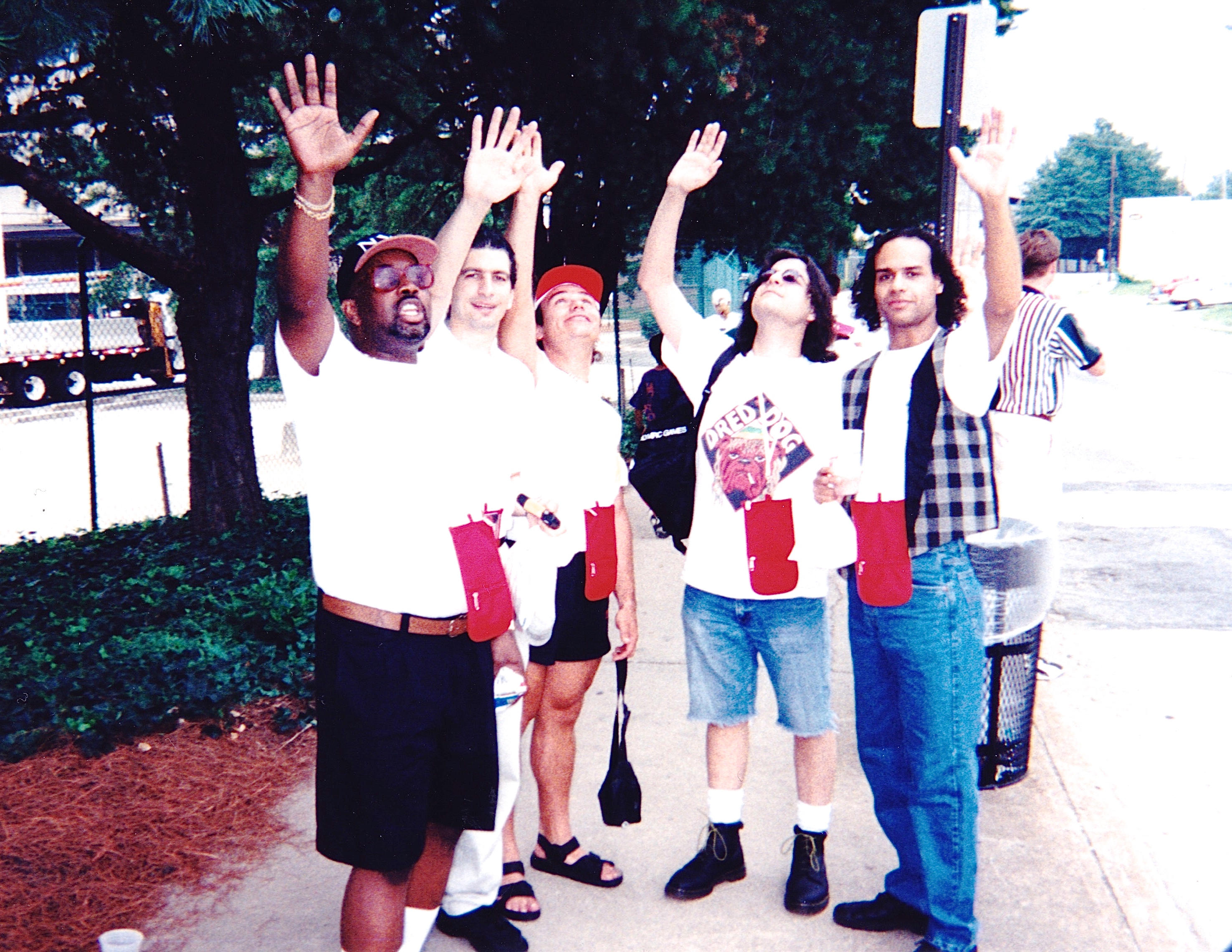