The news about the Fyre Festival disaster spread fast.  Hordes of unsuspecting millennials who were promised a luxurious "VIP music experience" in the Bahamas were simply cheated out of thousands of dollars, and left stranded on an island with bad cheese sandwiches and wet mattresses.

It's easy to assume that us forty-somethings are having a laugh at your generation's expense.  But the truth is, we actually admire (and envy) you millennials, for your mastery of rapidly-changing technology, your social consciousness and connectivity, and your spirit of adventure that drives you to seek out the most compelling experiences in life.

So I speak to you today, not as a 45-year-old man, but as a professional musician who’s been on the grind paying bills with 4 strings and a smile since you were born.  I’ve played hundreds of dodgy gigs over the last two decades, and I’ve seen it all.  Sound, lighting and stage gear smaller than necessary or contractually-agreed-upon.  Crap food.  Shoddy, insufficient accommodations backstage, and even more dismal lodging after the gig.  But those memories fade and become great stories, and I ultimately find myself having some empathy for the promoters and organizers who put on these shows.  I don’t envy these poor souls, because Big Rock Shows involve meticulous, multifaceted planning and organizing I could never comprehend.  And honestly, as long as everybody gets paid and nobody gets injured, most musicians can hit the stage, rock asses, and go home happy having survived another night in show business.

But for the “organizers” of the Fyre Festival, I have no such empathy.  And not just because they took money from a bunch unsuspecting young people and left them stranded, literally, on a f***ing island with no food or water.  (They say their “infrastructure wasn’t set up in time,”  but their infrastructure for accepting payment online was up and running immediately.  Their e-commerce A-game nearly caused a humanitarian crisis; nice work, bros.)

No, what finally rocked me out of my schadenfreude stupor was the  promo video for the Fyre Festival, ironically being shared online like an invitation to the launch of the Titanic.  It features sexy models swan-diving off of yachts into crystal-clear blue water and “epic music festival” B-roll, as titles flash on the screen promising “AN IMMERSIVE MUSIC FESTIVAL” and “THE BEST IN FOOD, ART, MUSIC AND ADVENTURE.”  This is the short-sighted, ignorant nonsense that makes my blood boil.

Listen to me very carefully: live music itself is an immersive experience.  Whether it’s a local club gig or a massive stadium spectacular, your body sharing a physical space with top-notch musicians kicking ass is about as “immersive” as it can get.  I know I’m not the first person to whine about bogus “VIP Concert Experiences” and I despise them as both a performer and as a concertgoer.  But my hope is that the Fyre Fiasco will finally be the tipping point that inspires savvy, adventure-craving millennials to discover what the Baby Boomers already know about: the raw power and magic of pure, high-quality Live Music.

Here’s a true story about the “best in food, art, music and adventure.”  A few nights ago I went with a singer buddy of mine to see The Revolution at BB King’s in NYC.  I took the train from Brooklyn to Times Square, and met my buddy on the ticket-holders’ line.  It was a glorious, warm sunny day in Manhattan as we hung out with our fellow Prince-lovers on the street, including one guy who’d just come from “Celebration 2017” at Paisley Park.  We got inside and went to the bar, where I enjoyed some delicious BBQ chicken sliders and a nicely poured Jameson.

We then stood on a crowded, sweaty dance floor surrounded by hundreds of our fellow black white latino asian gay straight butch femme queer trans cis whatever short tall New Yorkers, all of us coexisting peacefully, respecting each other’s space and getting happily funk’d by the pre-show DJ and then by The Revolution themselves.  Halfway through the set the band left the stage while Wendy & Lisa played “Sometimes It Snows In April” on just piano and acoustic guitar, and you could hear a f***ing pin drop as Wendy sang a tribute to her departed legendary friend with raw emotions that touched everybody in that room.

After the show my buddy and I snuck backstage without any passes (I’ve played BB Kings a thousand times so I know where all the secret passageways are).  But security was tight.  Eventually a bouncer was politely but firmly escorting us out, but he unknowingly escorted us in a direction that brought us face-to-face with Wendy Melvoin.  With the bouncer’s hand still on my shoulder I told her what a Rock Goddess she’s been to me for thirty years.  She was sweet and gracious, shaking my hand and looking me in the eyes as she spoke, while 15-year-old me freaked the f*** out.  Seconds later, 45-year-old me said farewell to Wendy before the bouncer lost his patience.  My buddy and I got out of there and we grabbed some frappuccinos at Starbucks, laughing all the way into the downtown train.

That, my friends, is an “immersive musical experience.”  My five senses were gratified beyond all expectations, and I have a fresh batch of memories that will last a lifetime.  And I didn’t even pass out from dehydration in a third world airport!  The total cost, including my concert ticket, food and drink, and round-trip subway ride was, I kid you not: $75.

Dearest millennials, if you’re paying $1,000+ to watch a band from a massage table in an air-conditioned tent on a beach, you’re doing it wrong.  Trust me: save your money for buying real estate, and come back to the intangible, immeasurable, truly interactive and immersive experience of Real.  Live.  Music. 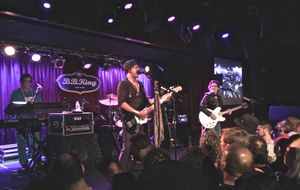 Do you really need anything more than this right here?